Home About us Social responsibility CONTRIBUTION INTO SPORTS 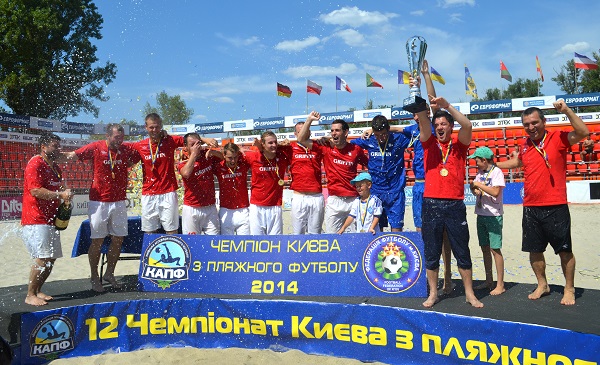 One of the directions of the social corporate responsibility of Impel Griffin is involvement of our staff into sports by realizing many interesting and active events. Also, for several years now, our staff and their families taken part in charitable runs such as “Run under the chestnuts”, children’s marathons, as well as competitions and events organized by us. Since 2006, Impel Griffin support the Mayskiy Military Patriotic Sports Club as the main sponsor of the club, which is part of the Kyokushinkarate federation, making our contribution into development of sports and healthy youth in Ukraine.

Our greatest achievement in this area are the Griffin football teams, established in 2008 by the CFO and co-founder of Impel Griffin Vyacheslav Reutskiy.

Unfortunately, the mini football as a sport remains in the shadow of its “big brother”, while at the same time, is one of the most accessible and popular type of sports in Ukraine. The goal of Impel Griffin in starting the Griffin team was to promote and popularize the amateur, and then professional mini football amongst the employees of the company and citizens of Kiev, as well as reaching substantial results of our teams in the local arenas on both, the club level, as well as on the team level.

Realization of social sports project Griffin allows us to fully apply the values of the Impel Griffin brand. Achieving a healthier level of life among clients and employees of the company, use of information technologies during the practice, and for contacts with the community (our site www.griffin.ua offers text and video broadcast), which helps strengthen the brand’s position in mass media and the community.

Our employees have the opportunity to fully participate in this significant social project and realize their ambitions, namely: enjoy their hobby on a professional level, or be a part of the fan club of our teams.

Improving health of our nation coincides with one of the Impel Griffin’s values – healthy lifestyle. This has a positive impact on the productivity of employees, as well as their ability to quickly and efficiently handle their tasks. Attending the games and supporting the teams is an undisputed and powerful motivator to win in the arena, as well as in business.

Presently, the football team Griffin are the leaders in mini football, which is confirmed by many significant victories. In 2014, both Griffin and Griffin 2 become the capital’s champions in beach football in leagues A and B, as well as runner-ups in the Ukraine championship. In 2015 the main team members of Griffin won the Super Cup in league A of the Business League 2015-2016!